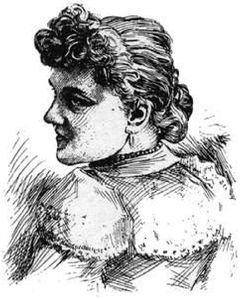 Emeline Cigrand is the eleventh victim H. H. Holmes claims in the newspaper confession published two weeks before his execution. She is likely one of his real victims – not a lie created to bump up his body count.

She was also connected to Holmes long before his confession.

Emeline Cigrand was brought to Chicago to work as Holmes’ stenographer. Depending on the version of the story, Holmes either hired her through a Chicago typewriter firm, or Benjamin Pitezel met her while he was away on the “Gold Cure” for alcoholism and then informed Holmes of the beautiful secretary. Either way, it was known that Emeline Cigrand moved to Chicago in order to work for Holmes.

The story Holmes tells in his confession is the same one he sold her parents after her disappearance: that she had met a man and was going to leave him for her. The difference is that, in responding to Peter Cigrand in a letter, Holmes argued that Emeline had indeed married this unnamed man and had then moved away with him suddenly. In a second letter, sent a few weeks later, Holmes claims that the new “Mrs. Phelps” has been located and her unexplained absence satisfactorily clarified.

The Cigrands carefully examined the last letters they received from their daughter. One of them said she was going to get married, and the very last one lamented that she had in fact married a bad man and would leave him as soon as possible. Upon closer inspection, this last letter was determined to be a forgery.

The truth, at least as Holmes claims it in his confession, centers on the large vault he had installed inside his “Murder Castle.” Because Emeline had become his mistress as well as his indispensable secretary, he couldn’t let her go.

Holmes writes that Miss Cigrand stopped by on her way to her wedding and Holmes offered her a counter proposal: if she wrote a letter to her fiancé telling him that she decided, at the last moment, she could never be happy with him, Holmes would take her to another city and live there with her as husband and wife. The letter to the fiancé made it clear that it would be useless to look for her, thereby covering Holmes’ trail.

He says she was “very willing” to write the letter, except he also tells readers that, at the time he made this proposal, Emeline Cigrand was locked in the room-sized vault. The only way for her to escape it is to agree to write the letter, which she apparently did, before suffering a slow and lingering death.

It seems that, in spite of this turn of events, Emeline did not think to destroy the letter, or perhaps Holmes forged one to the fiancé the way he seems to have done with one to her family. Either way, Emeline disappeared at the end of 1892 and Holmes did not confess until 1896. He maintained that she had married and gone abroad with her new husband.

Emeline Cigrand is believed to be a “true” victim of Holmes, along with Julia Connor (and her daughter) and Minnie Williams because she was known to be his mistress. Holmes killed for money, the way it seems he killed Minnie’s sister, Nannie, but he also killed women once he had tired of them or they became annoying to him. It seems that Emeline Cigrand may have also known more of Holmes’ dealings than he felt comfortable and so, in his mind, the only way to ensure her silence was through her death.

Holmes’ bald statement that he locked Emeline Cigrand in the vault and left her there to die just increased the legend surrounding his Murder Castle and his own status as a heartless killer. While this confession may have allowed her family to gain some measure of closure, it would have also been terrible for them to read.