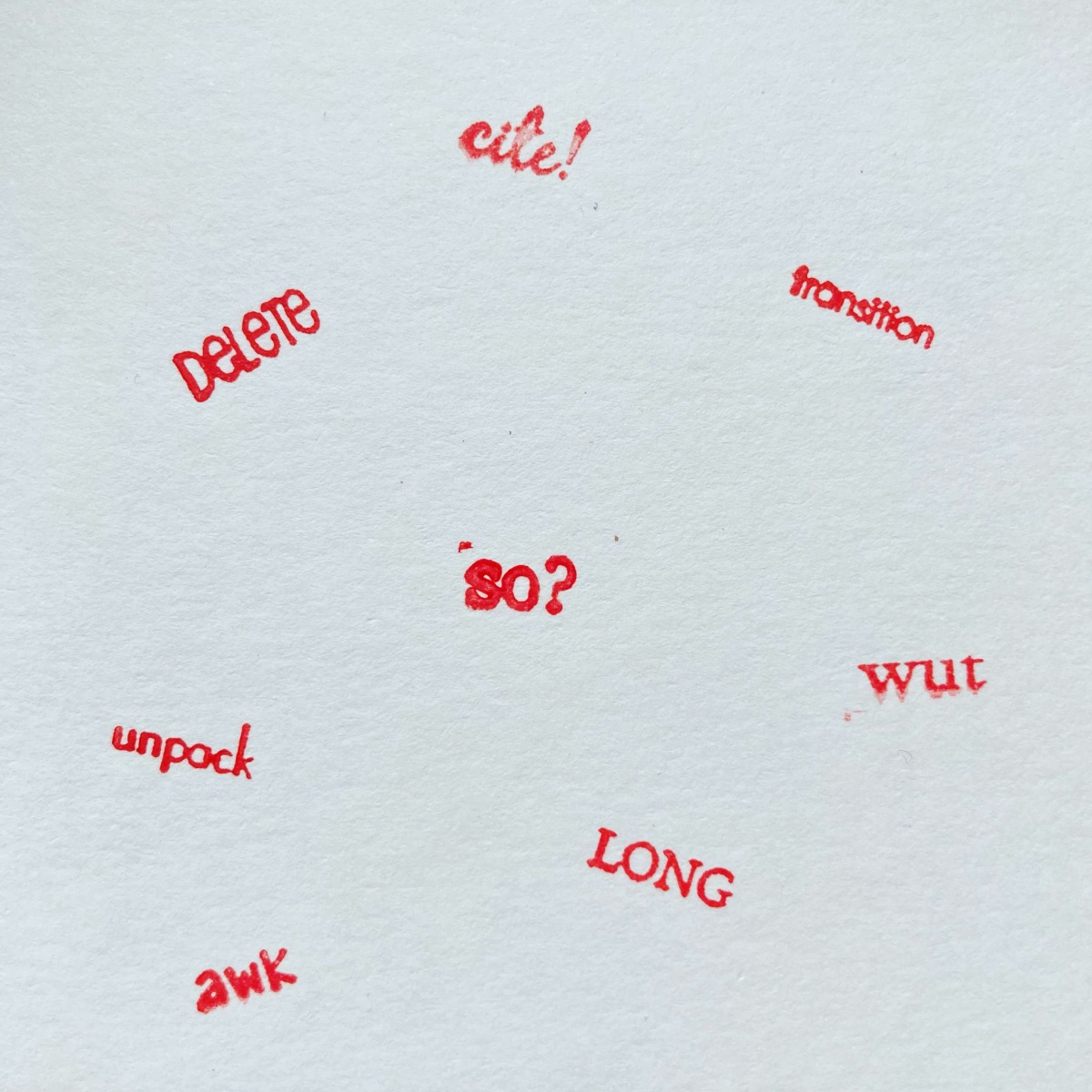 The other day someone took to twitter to ask writers what their first drafts look like. Are they tight and polished? How much work do you have to do once you get things drafted? Is it all clean and basically perfect?

I’ve got more space to answer here, so I’ll start with this: no one sees my first drafts. Just me. I’m not even going to take a photograph of one of the pages to give you an example of what it looks like after I’ve read it through and marked it up. So that’s comforting, at least: nobody ever has to see your first draft.

I did respond with this photograph of my personalized editing stamps, and I want to talk a bit more about them. Starting with a question to you: how many times would you have to anticipate writing something before you bought a self-inking stamp to use instead?

Not only are my first drafts far from perfect, but I know what issues I should be looking for. I’m predictable.

Why not just correct those issues while I’m drafting, then? You try it. Writing’s hard. It’s enough of a struggle to get the words on the page without also adding the idea of perfection on top of it. Have you ever found yourself staring at a blank cursor because you don’t want to make a mistake? That’s no way to get things written.

So, while I won’t show you an ink-covered draft page, I will at least go through my stamps with you.

cite! – the meaning behind this one should be clear enough, but having this stamp also means accepting a particular practice: that I don’t have to always stop and look something up when I’m writing. If it’s going to interrupt the flow, I’ll just dump something in that’s close to what it should be and then go back and look it up later, during editing.

delete – not everything I write will make the final cut. It’s sad, but sometimes darlings have to be killed. Or at least moved into a different document.

transition – ah, yes. I am fond of using headings to jump from one topic to another without adding in a transition. Part of it is how I need to write the next section before I fully understand what I’m transitioning to. Another part is being able to jump from section to section when I’m writing without forcing myself to follow the outline point by point.

SO? – the big one. I’m rather fond of knowing exactly why I’m talking about something and how it connects back to my main point, but not actually coming out and saying it. And again, that’s fine, because (again again) nobody reads my first drafts. It’s something that can easily be picked up and worked in on a second pass.

unpack – yeah, it’s a buzzword, but these stamps are tiny and you can only fit so many letters on them. Basically this fits in with SO?: there’s something going on here, but I haven’t actually slowed down enough to say it. I’m trying to get through all of these ideas without fully laying them out and explaining and making connections. The ideas are all there, which is the most important part, and I can add in the support while I revise.

wut – everyone’s favorite. Look, there are times when I just have no idea what I was saying. Maybe I’ll figure it out. Maybe it’ll get changed to delete.

awk – sometimes I’m an awkward duck and it shows in my writing. Revising makes me look less awkward. Did I mention I never show anyone my first draft?

I have stamps of these things because I know that I do them. I anticipate that I’ll keep on doing them.

I give myself permission to keep on doing them.

The first draft is just you telling yourself the story. (Thanks, Terry Pratchett.) No one else has to see it. No one has to judge it – not even you. Get the words on the page first so you can shift to concentrating on having them make sense before you show them to someone else.

5 thoughts on “The garbage will do”