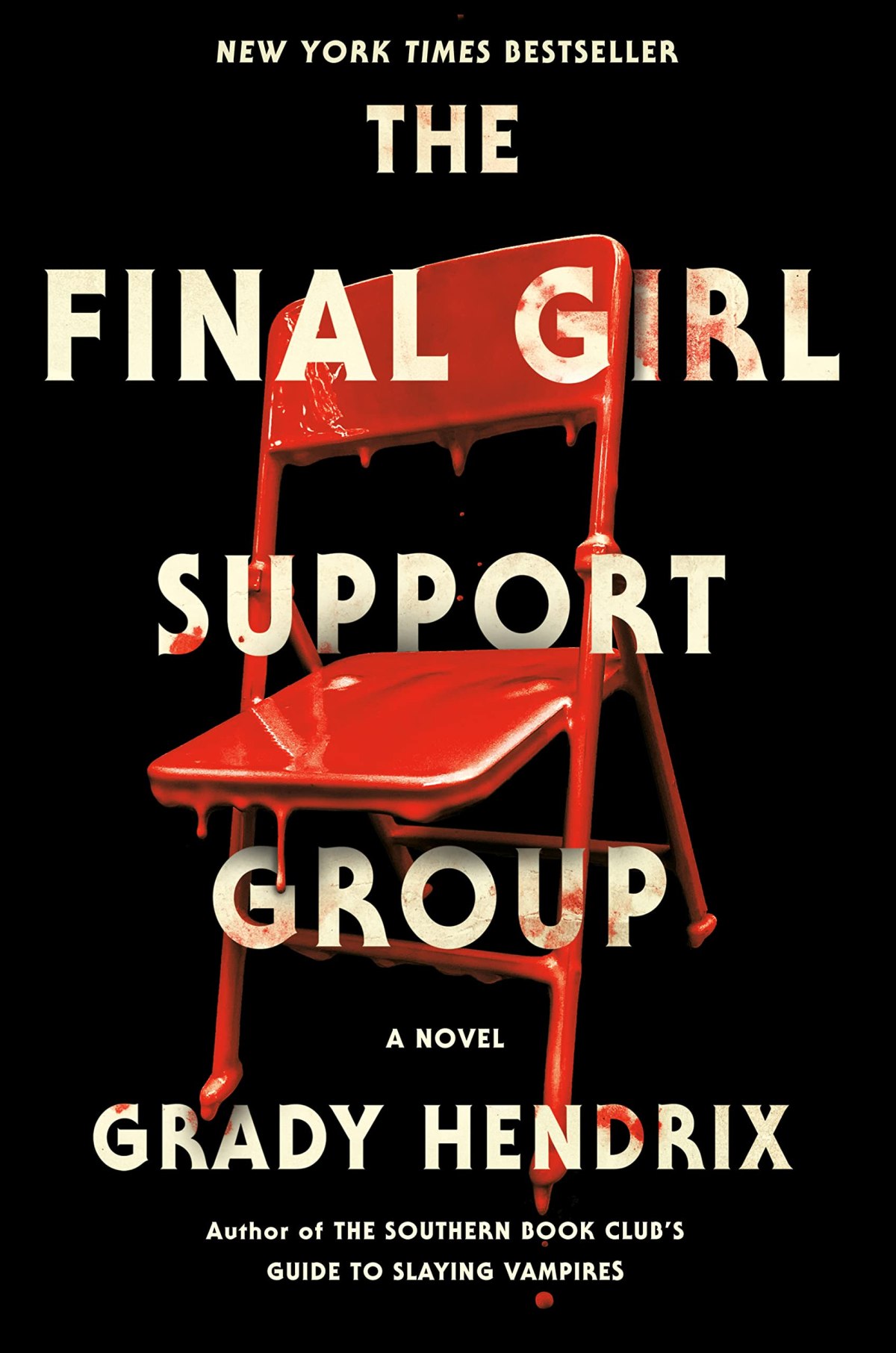 It’s time for book 6 of my 12 challenge: late last December, I decided to go ahead and do the “12 Challenge” that was going around Twitter: 12 months to read 12 books recommended by 12 friends. I specifically requested true crime and thrillers, looking for good books I haven’t read yet. Follow that link for my thoughts on the first five books.

Book 6 is The Final Girl Support Group by Grady Hendrix.

I mentioned in my post about Night Film that it’s full of “sources”: documents from the world of the book that keep popping up and forcing you to do some odd zooming and scrolling if you have the Kindle version. Final Girl Support Group does the same sort of thing, opening each chapter with background information about the women in the support group – the final girls. But this publisher added a lovely “click here for a plain text version” link beneath each document’s image so it was far easier to read as an eBook.

A “final girl” is the lone female survivor of a slasher movie – or, in this case, the real-life women on which 80s slasher franchises were based. To be a real final girl, the main character tells us, they have to have killed the slasher personally. Lynette Tarkington, our narrator, therefore isn’t a real final girl. She “had to be rescued” from her killers.

Lynette also seems to be having the most trouble getting on with life a couple decades later. Her apartment is a fortress. She measures the risk of every single move she makes, and therefore makes very few. There’s this constant fear of “getting a sequel” or “continuing the franchise” – she’s already been attacked twice, but the real-world murders that inspire the films also keep repeating. So it’s going to take a lot to get Lynette to leave her apartment for anything other than the support group meeting, and even more to force her to rely on other people.

A little bit Ready Player One

We didn’t grow up watching many movies in our house, and especially not horror movies. (Seems weird for the kinds of books I like to read, maybe, but even with Stephen King I’m far more into his books than the movie adaptions.) I know who Freddy and Jason are, but through general cultural exposure and Simpsons spoofs.

The women in the Final Girl Support Group all relate back to real-life franchises, presented under different names. If you watch and love horror movies, then I’m sure you’ll make a lot more connections than I did. Still, even without all the references, it’s a good read, the way I was pulled through Ready Player One despite not being into video games and being born a little too late to have fully lived it.

Okay Wally Lamb doesn’t write horror, but he does write unlikable main characters. I first read She’s Come Undone and Dolores was all right – struggling and far from perfect, but I was rooting for her – but that didn’t hold for the male antagonists of I Know This Much is True or The Hour I First Believed. Anger issues, anyone?

I don’t particularly like Lynette. Part of it is probably how I can’t relate to her, having never been the main character in my own horror movie or had someone come back for the sequel. It’s also hard to determine exactly how long ago these things happened to her. How old is she? How much of her life has she spent living like this? And how, exactly, did she learn to keep herself safe? Because as much as that fear lives at the center of her life, not much of what she does seems to actually work very well.

Part of that is the point of the book, of course: that someone’s now coming after the final girls, which will leave the final girl of the final girls (who, the others sneer, won’t be Lynette, because she isn’t even a real final girl. But hey, maybe she’ll get her first kill?) And part of it is the disconnect Lynette has from real life. Which is understandable enough once you finally get to know a bit about what happened to her, but that’s still many long years between then and now.

After a bit of a rocky start with getting to know Lynette and trying to keep all the support group members straight, I devoured the book because I wanted to know how it ended. Who was after all the final girls? How did they get around Lynette’s protective measures so quickly? (But what the heck was up with some of those side characters? There was one sidetrack that made my disbelief a bit too heavy to suspend, but by that point I was invested, so I plowed gamely on through.) And there’s no way to say it without spoilers, so I’ll settle for “I liked a lot of what happened at the climax and in the wrap-up.”

If you’re a horror fan and you’ve read The Final Girl Support Group, what did you think? Or, if you’re like me and have only the vaguest slasher franchise knowledge, do you think it detracted from the book or it stood up on its own?